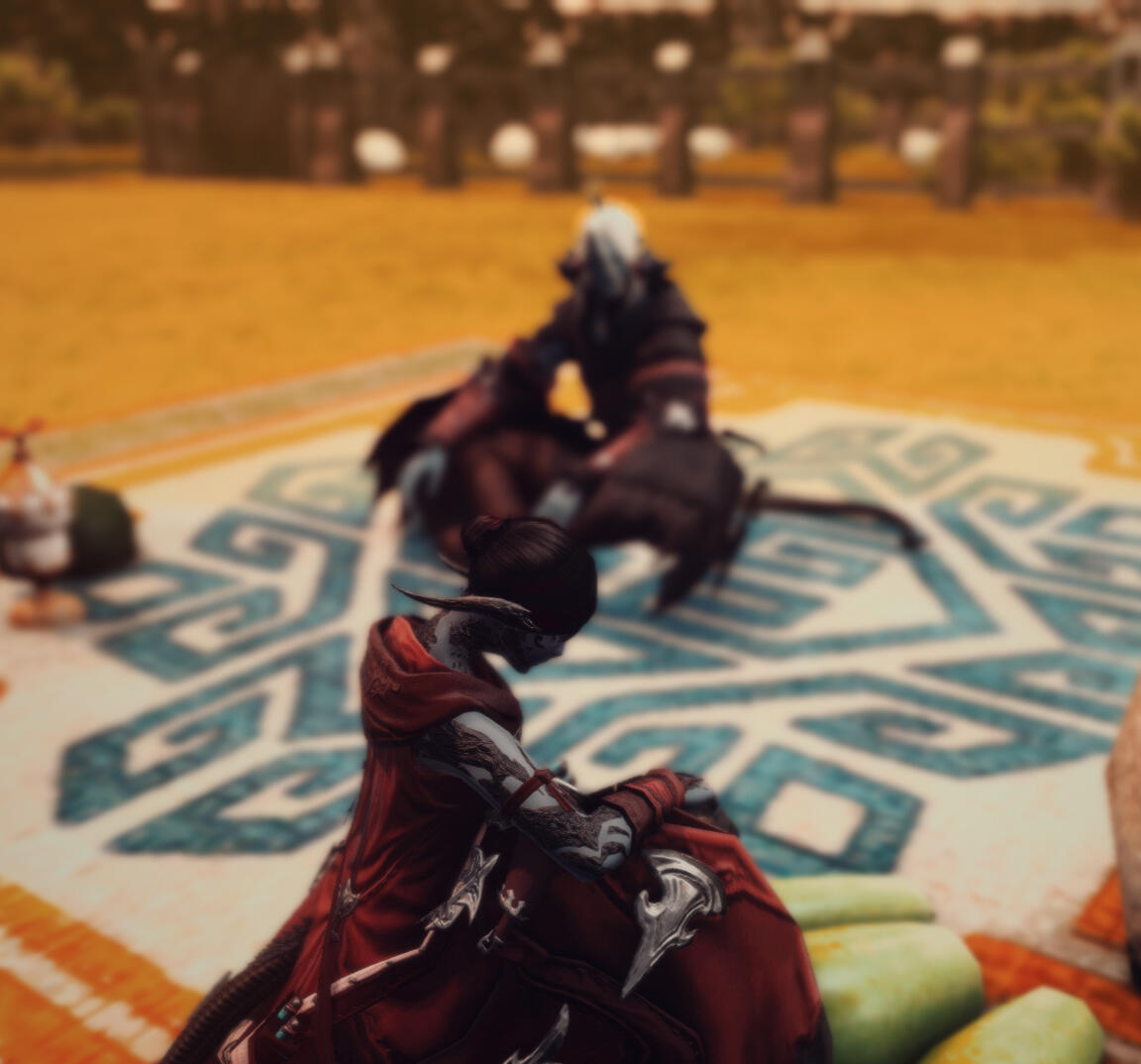 Kama Okeya was born and raised in a small Xaela tribe, at a young age she showed promise that was far beyond her peers in the realm of magic, she was taught that her gift was given to her by Nhaama and her bloodline. At a young age Kama revered the tribe and its elders, showing much more respect and being more genteel in the presence of adults. Her reverence for the tribe, the pride in her bloodline and her magic would drive her passions. She would seek out old texts, study long hours under the guidance of other spiritually gifted and train hard, from daybreak to nightfall she devoted herself to her tribe. Over the years however she could see cracks forming in the ideology and methodology of her people. Even when speaking to the elders about it she could find no solace in their answers, only questions. Time takes its toll on many things and Kama’s Will was one. It was during the battle over the Ovoo that Kama would hatch a plan she had been working on for almost a year. She intended to leave her tribe, in search of answers. It was during the battle that she would run away, too young to participate, she along with her kin were being tended to by the elders too old to fight. During a moment of distraction she made her get-away, like dust in the wind Kama Okeya was gone. It would only take mere minutes for the Elders to notice her absence, days to realize she was not coming back and weeks to realize that she had turned her back on the tribe. From then on she was exiled, a possibility she was aware of. To her the means justify the ends, she was not simply leaving her life behind for something else. She was setting out to learn the truth, and bring back evidence, truths that could save her people, truths that could inspire generations to come. Unfortunately her old self Kama Okeya would have to die for this to happen, in her place Fume Vorin would stand, a Xaela determined to redeem her old self and to improve the lives of all Xaela of old.

Fume had spent years traveling, studying and learning, picking up the habits of the new world and the vices. She would often find activities such as gambling and drinking hard to avoid, and her finances unable to keep up she set out to find an occupation that allowed for these in addition to her studies for her people. This is where Fume found the lucky 7’s. It was a dream in some ways, It paid well, they didn't ask many questions and she got to gamble and drink whenever she liked.

Still she studies and works hard for her people, Spending her free time with her nose in a book, or in the training yard, honing her craft as a sorceress. The only things that ever seem to pull her away being her vices, Booze,Gambling or work itself.

Those who do not know Fume might consider her rude,stubborn,mouthy,perhaps dismissive or scornful and possibly quick to anger. The truth is that she is dedicated, She spends every day of her life to a cause that can't possibly ever be completed, she knows it deep down and it stings her very soul. Her Tribe does not live the way they do because they do not know better, they live the way they do because they want to. It can't be changed by facts and knowledge alone, but still she dedicates her life to this goal, always wearing her down. As a result she rarely makes friends, preferring relationships of transaction, a few gil here, a few drinks there, a free meal, some information. Nothing more nothing less. It's not that she doesn't care, but that her entire dream, her goal in life is impossible.It shackles her now, to a lifestyle that is unhealthy, yet productive.

Blemishes - Left horn has a silver ring around the middle of it, covering up a blemish from when it was broken in half.

Looking for: E/Rp, Ranging from short to long form posts. Both discord and In-game available with a preference for discord.